My research focuses on modelling the dynamics of ecological systems, from both theoretical (study of prey-predator or host-parasitoid systems) and more applied (forest, epidemic, fishery) perspectives. I use methods coming from the mathematical (dynamical systems) and computer (cellular automata network, individual-based models) sides of ecological modelling. Since 2003 I am employed by the Institut de Recherche pour le Développement (IRD) and presently in the MARBEC research unit.

I am currently coordinating the GDRI-Sud iMarCo, a research group funded by the IRD on marine connectivity. This research group constitutes the African component of the international GDRI iMarCo group. It gathers researchers and PhD students from several African countries (Algeria, Cote d'Ivoire, Djibouti, Mozambique, Senegal, South Africa, Tunisia) with various scientific expertise in genetics, otolithometry, and modelling. From 2010 to 2015 I led the COMPO research project on marine population connectivity in New Caledonia. Before this I was involved in the French - South African co-operation research program IDYLE , that evolved into ECO-UP, a joint program between the IRD and other institutions, mainly University of Cape Town (UCT) and Marine & Coastal Management (MCM) in South Africa, Instituto del Mar del Perú (IMARPE) in Peru and Institut National de Recherche Halieutique (INRH) in Morocco. These programs focused on studying the structure and functioning of exploited upwelling ecosystems. I was in charge of developing models to study how physical (e.g., currents, water temperature) and biological (e.g., growth, mortality) factors affect the dispersal of ichthyoplankton (fish eggs and larvae). This activity resulted in the Ichthyop Lagrangian tool. The images below, obtained with this tool, show an example of the dispersal pattern for passive individuals released within five different areas off the South African south coast. 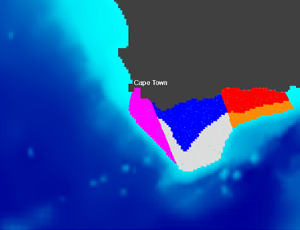 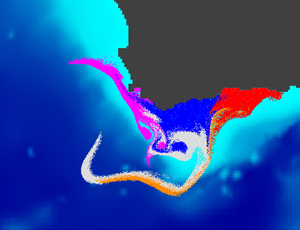 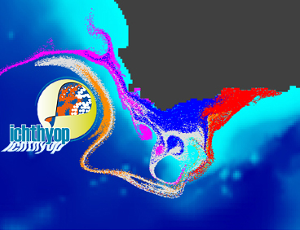 Animal groups such as fish schools, bird flocks, insect swarms and mammal herds, have spectacular collective behaviours. Efforts in trying to formalise the basic individual behaviours responsible for animal groups complex dynamics began more than 50 years ago, and since then many models of the dynamics of animal groups have been proposed in the literature. Different approaches have been used in these models, coming from the mathematics, physics, and computer sides of science. In most individual-based models of animal groups, individuals have three types of local interactions with their neighbours, attraction, alignment and repulsion, operating mainly at long, medium and short distances, respectively. The most famous example of it is probably the Boids computer model. Another example is the Aquarium applet that I found on the Web some time ago (and could not find back, so unfortunately I am not able to acknowledge the author). If interested in such tools you can also visit Cool School. 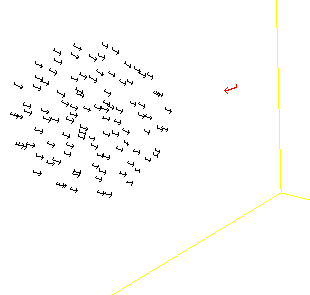 Simulated group before an attack 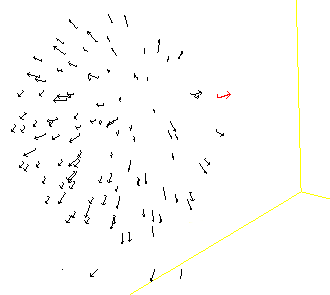 Simulated group after the attack

From November 1999 to September 2000, I had a post-doctoral position at RISØ National Laboratory - Plant Biology and Biogeochemistry Department - Plant Genetics and Epidemiology Programme in Roskilde, Denmark. I developed a model simulating the spatiotemporal spread of plant disease epidemics in cultivar mixtures. The project focused on the dynamics of pathogens attacking cereal cultivars, and more specifically on the dynamics of yellow rust (Puccinia striiformis) in wheat cultivar mixtures.

Space represents a 12 m side square parcel. Initially, one infection is put in the centre of the parcel (image on the left). An infection focus forms (image in the centre), develops, and satellite foci appear (image on the right). Each black pixel represents an infected plant. Each yellow pixel is a non infected plant. On the shown example, the parcel has a density of 400 plants per hectare and there is only one cultivar.


You can see the whole simulation in a video file (avi format 1 Mb or compressed zip format 137 Kb).

My Ph.D. fitted into a new project aiming at developing one or several models that enable to answer questions concerning forest communities biodiversity, in particular on the factors which favour their species richness. My personal contribution to this project was to study to what extent simulation models of forest dynamics could give insights to these questions. My work showed that before using such models for prediction, there were several difficult stages to pass through: choice of the model, choice between different approaches of spatialisation, sensitivity analysis of the parameters and initial conditions, validation towards field data.

To get details about this work you can download my Ph.D. dissertation (in French, pdf file 2.8 Mb).

The simulated forest ecosystem consists of three groups of species: shade tolerant (in green), shade intolerant (white) and intermediate (yellow) species. The tree crowns are represented by discs within a 50 m side square parcel. Starting from a situation where no individual is present, shade intolerant (light-demanding) species first install (image on the left), then intermediate species succeed (image in the centre), and shade tolerant species finally dominate while other species persist within gaps created by the death of big individuals (image on the right).

The different methods used to build models of population dynamics stand on a large spectrum with, on one side of the spectrum, simple mathematics-based models (using differential equations or matrices) and, on the other side of the spectrum, complex computer-based models (or simulation models, like individual-based models or multi-agent systems). The advantage of the mathematics-based models is that they may be tractable analytically, but they are often considered as over-simplifications of the reality. On the contrary, computer-based models are closer to reality but their dynamics can only be tracked through extensive simulations. There is not much interaction between these two "worlds" of population dynamics modelling. Developing such interactions was one of the objectives of the Mathematical Biology Team in Laboratoire de Biométrie et Biologie Evolutive at University of Lyon, France, in which I got an Assistant Professor position in September 2000.

Example of the SIRS model

One can imagine to build a simulation model simple enough to stay close to a given mathematical model and analyse the conditions under which the two models show similar dynamics. Let's take the example of the SIRS model in epidemiology. We wish to build a spatial version of this model. We can build a computer model where space is discrete, e.g., a grid of square cells. Each cell takes one of three possible states, S (sane, in blue on the images below), I (infected, in red) or R (removed, in green). A cell in state S switches to state I the time step after with a probability equal to the proportion of cells in state I in its neighbourhood. A cell in state I switches to state R with a constant probability. Similarly, a cell in state R switches to state S with a constant probability. The model built this way is a stochastic cellular automata network. This model was implemented using the programming environment Cormas developed by Cirad. The simulation model dynamics converges to a situation where the number of cells in each state remains approximately constant, as predicted by the mathematical model.


You can see the simulation in a video file (avi format 1 Mb or compressed zip format 128 Kb).

Another way to build the gap between mathematics-based and computer-based models may be to build mathematical models that take more into account individual behaviour than classical models do. This has a cost, the difficulty to get analytical results concerning the resulting complex models. Variables aggregation method is often useful to reduce the dimension of such models, in the case where they involve processes which take place at different temporal scales, for example migratory processes at a fast time scale (daily, weekly) and demographic processes at a slow time scale (monthly, yearly). We adopted this method to reconsider classical host-parasitoid models (like the Nicholson-Bailey model) in a spatial context, with individual migrating from one patch to a neighbouring patch several times within a generation before the parasitism interaction takes place. This study showed that migration, when it is asymmetrical (the parasitoids, principally, should move in a preferred direction), could facilitate the persistence of host-parasitoid interactions. Other studies (Hassell et al. 1991; Comins et al. 1992) suggested that local migration could stabilise host-parasitoid interactions through the emergence of spatiotemporal patterns like spirals (the animation in the margin) or spatial chaos. 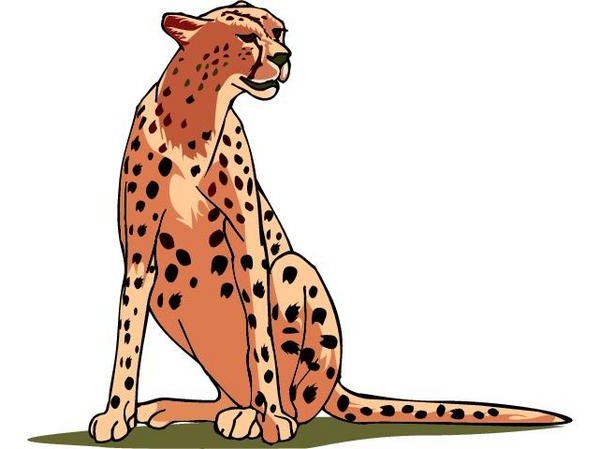 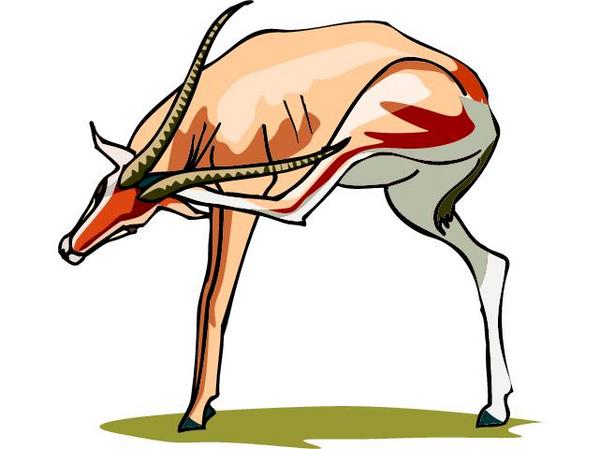 A lot of studies have addressed the potential benefits and costs of group living for predators and for prey, but this has not been much formalised within a model. We focused on the "many eyes - many mouths trade-off", assuming a trade-off between the benefits of group living (increased predation efficiency for predators, increased defence against predation for prey) and the costs (the need to share the captured prey for the predators, to share the resources for the prey). We built a model based on game theory to study this trade-off. The model results are in accordance with empirical evidence that habitat openness encourages group living, and that low risks of predation favour lonely prey. Under some conditions, complex dynamics may occur, like time oscillating proportions of grouped predators and prey. 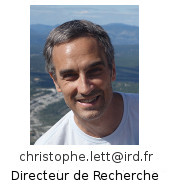